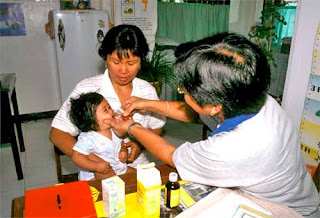 Iâ€™m sharing with you this brief list of infections that are existing, recurring or has the potential to cause an outbreak. There are non-infectious diseases on the list but, still may cause an epidemic. I wrote this forÂ  Peopleâ€™s Tonight. My source was the ever friendly Dr. Eric Tayag, who was the head of the National Epidemiology Center (NEC) of the DOH. He is now serving as Assistant Secretary of the DOH. I hope you will find this information useful.

Cholera
|
Outbreak looms particularly in areas where â€œintegrity of water system is compromised and human factor such as unhygienic practices and sanitation is below the acceptable standard.â€

Injuries
|
Health experts are concerned about the hidden epidemic of injury cases.
Although itâ€™s not infectious it can cause deaths.

Measles
|
Measles, also called rubeola, is a highly contagious â€“ but rare â€“ respiratory infection that is caused by a virus. It causes a total-body skin rash and flu-like symptoms, including a fever, cough, and runny nose.

Other causes of poisoning not necessarily food-related
|
The incident of mercury exposure of students and faculties of St. Andrewâ€™s School in Paranaque a few years ago has heightened public awareness on environmental poisoning.